La Liga in the second spot with 10% player representation

The World Cup starts in a week and Monday was the last day for squad submissions. We analysed the composition of selected squads in terms of individual leagues and clubs.

It is no surprise that Europe’s five most significant leagues will have the most prominent representation at the 2022 FIFA World Cup.

However, the Premier League stands clear of the rest of the top leagues when it comes to producing World Cup stars. It boasts more than 16% of the talent pool that will be on display at the world football’s most prestigious event. In other words, almost every one in six players selected to play at the World Cup plays in the Premier League.

Outside the top five leagues, Major League Soccer of the United States is set to have the most significant number of players at the Cup at 35. This number also makes MLS the non-European with the best representation at the World Cup.

It’s also interesting to note that the English Championship also features in the list with 25 players at the World Cup. No other second tier of the national football league comes close to this level of representation. In comparison, Segunda Division (Spain), Serie B (Italy), and 2.Bundesliga (Germany) will only have three players each at the tournament. 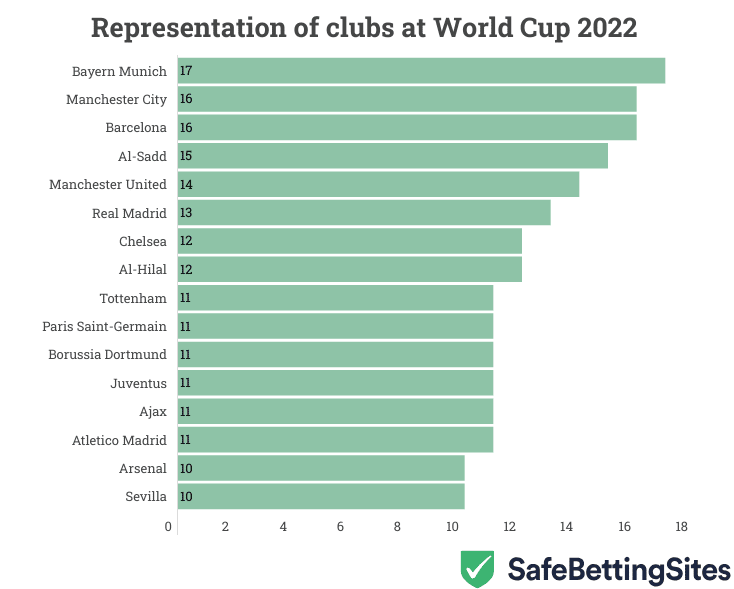 When it comes to individual clubs, Bayern Munich leads the list with 17 players. It is followed by Premier League champions Manchester City and La Liga giants Barcelona with 16 players each.

Al Sadd FC of Qatar is the top non-European club on the list, with 15 players. Premier League giants Manchester United will have 14 players at the tournament, followed by Real Madrid with 13.

Premier League side Chelsea and Saudi Arabia-based club Al Hilal will have 12 players each at the World Cup.

5 Premier League clubs, 4 La Liga clubs, 2 Bundesliga clubs, and one club each from Serie A, Ligue 1, Eredivisie, Saudi Pro League, and Qatar Stars League will have at least ten players at the 2022 FIFA World Cup

View all posts by Vyom Chaud
Premier League Stars to Make Up 16% of World Cup Talent
Was this article helpful?
2
1
Latest Betting News