Belgium should be one of the exciting teams to watch in this year’s World Cup in Qatar. The world’s second-best men’s national team boasts of prodigious talents such as Eden Hazard, Kevin De Bruyne, and Leandro Trossard. Going by its average age, the team will also be among the most experienced to strut the Qatari pitches.

The team that’ll be seeking to clinch its maiden WC trophy on its 14th attempt is the oldest at the showcase. That’s according to a Safebettingsites analysis of the average ages of participating teams. The site concludes that the Belgians’ average age of 28 years is the highest at the event. 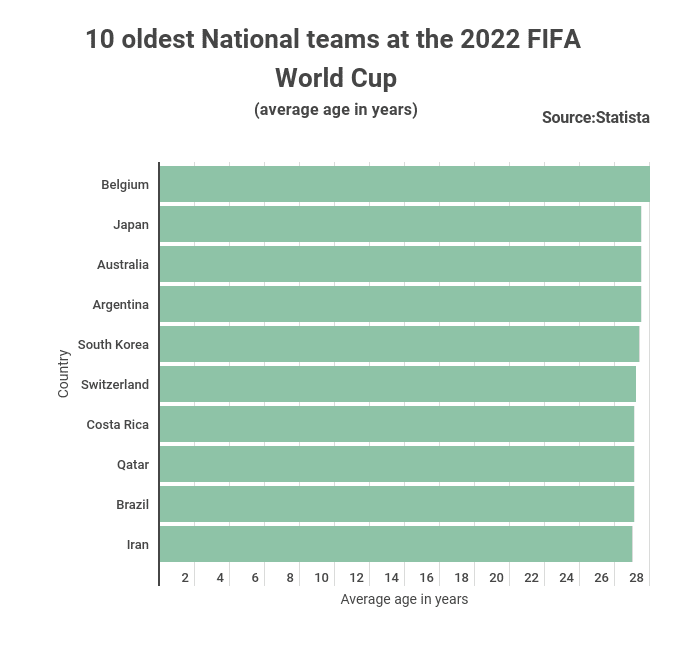 The Belgians’ seniority could be a boon

Safebettingsites’ Edith Reads has shared her thoughts on the data. She reckons the Belgians’ “seniority” in age could be a boon for the team. She holds:

“There’s a lot that goes into team selection, and one important factor is experience. At 27-28 is when most players are in their prime. It’s an age that comes with a certain maturity mentally. And that maturity is key in handling the pressures associated with such tournaments.”

Belgian head coach Roberto Martinez and his staff have opted for a good blend of experience and youth. So, on the one hand, you have battle-hardened workhorses like Jan Vertonghen and Dries Martens, who are 35.

And on the other, you’ve budding talent in Charles De Ketelaere(21) and Loïs Openda(22). In between, you have a good spread of players in their mid to late twenties.

A deeper look at the squad shows where the Belgian bench went for most experience. At an average age of 31, the goalkeeping department is the oldest of the team. The defense follows with 28 years, then the attack at 27.63 years. Finally, the midfield is the youngest at 27.17 years..

How do the other teams compare?

Japan, Australia, and Argentina are the second oldest teams after Belgium. The three have an average age of twenty-seven and a half years each. South Korea and Switzerland then follow with mean ages of 27.4 and 27.2 years, respectively.

At the other end of the scale, we have the youngest teams in the tournament. These have average ages of under 25. Ghana (25) is the third-youngest team in the WC. Only the U.S (24.5) and Mexico (24.8) are more youthful than the African representatives.

Although Edith espouses the value of a mature squad, she’s quick to mention that being older isn’t a guarantee for success. Youthful teams have at times pulled surprises on more experienced opponents. She insists other factors like the team’s preparations, the nature of their opponents, and their level of fitness also affects performance.

And that is one thing that Manager Roberto Martinez will be well aware of. His team will be coming against some of the globe’s best. They, therefore, have to be at their best to guarantee themselves a chance of proceeding further in the competition.

View all posts by Edith Muthoni