Mobile game fortunes skyrocketed in 2020 thanks to shelter-in-place orders. In fact, the global mobile gaming market had generated $75.4 billion in 2020. Compared to 2019, that marked an increase of 19.5% year-over-year (YoY).

According to the research data analyzed and published by Safe Betting Sites, the top grosser across the Google Play Store and Apple App Store was PUBG Mobile together with its Chinese localization, Game for Peace. From January 2020 to December 2020, the game had generated $2.6 billion, up by 64.3% from the previous year.

In second place was Honor of Kings, which accumulated nearly $2.5 billion within the same time frame. In comparison to 2019, consumer spending on the game was up by 42.8%.

The two titles from Tencent were among the five games that crossed the $1 billion threshold during the year. Cumulatively, they raised $5.1 billion, higher than the $4.4 billion raised by the next four titles combined.

In the fourth spot was Coin Master, published by Moon Active. Its revenue of $1.1 billion for the said period was more than double the amount it generated in 2019. November 2020 was its best month ever as it made nearly $118 million, according to the study by Betting Sites Kenya.

Rounding out the five billion-dollar games for the year was Roblox, which was published by Roblox Corporation. Its mobile revenue for the period was $1.1 billion, double the 2019 total. Thanks to its cross-platform success, Roblox is preparing to go public in 2021.

At the same time, Mixi’s Monster Strike was close to the one-billion-dollar mark, having raked in $958 million in 2020, a 2.8% increase from the prior year. The game has been consistently featured in the top five grossing games every year since 2014.

Having five titles being featured on the 2020 billion-dollar list was a new record. In 2019, only three titles – PUBG Mobile, Honor of Kings and Fate/Grand Order – made the cut.

Similarly, there were three billion-dollar titles in 2018 – Honor of Kings, Monster Strike and Fate/Grand Order. In the period between 2014 and 2017, each year saw two titles join the exclusive club.

Despite the fact that most countries are returning to normalcy, people are still playing more than they did previously. According to a forecast published by App Annie, the mobile gaming industry is projected to generate more than $120 billion in 2021. 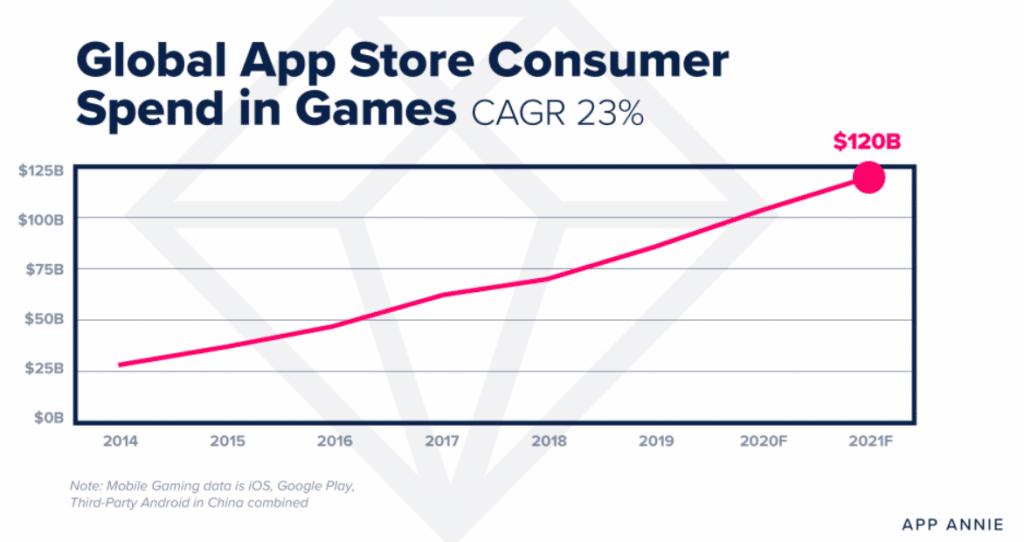 The reason cited for this is the fact that mobile phones are becoming more sophisticated. They are thus capable of providing experiences that were previously only accessible on PC and consoles.

For the global gaming industry as a whole, pandemic-related lockdowns drove sales to a 20% increase over 2019. According to IDC data, preliminary estimates place the total industry revenue for 2020 at $179.9 billion. 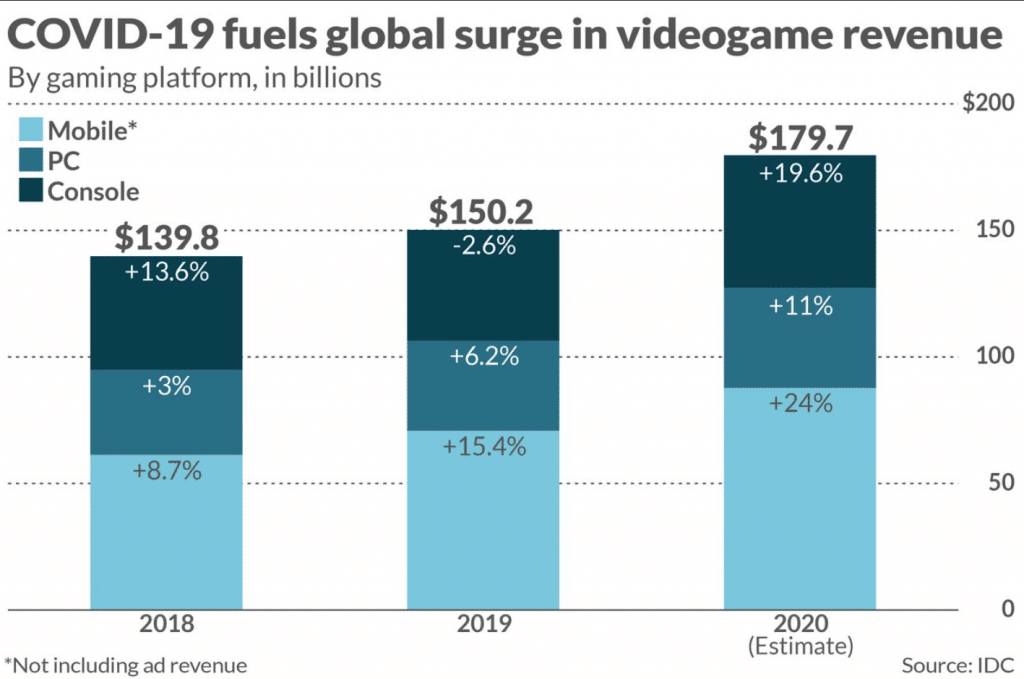 This makes the gaming market bigger than the global film industry and the North American sports industry combined. The film industry grossed $100 billion for the first time in 2019 and based on a PwC estimate, the North American sports industry was set to generate $75 billion in 2020. IDC expects the gaming industry to have double-digit growth in 2021 citing the introduction of next gen gaming consoles.

The US gaming market performance well illustrates this potential. In the first 11 months of 2020, video game spending shot up by 22% YoY to $44.5 billion according to NPD. Hardware sales during the period rose by 34% to $4 billion and software sales increased by 21% to $38.4 billion.

Notably though, the report highlights that most of the growth will come from the mobile gaming segment. Based on IDC’s data, mobile gaming revenue worldwide increased by 24% YoY to $87.7 billion in 2020. Comparatively, the growth rate for PC was 11%, reaching $39.5 billion and for console, 19.6%, reaching $52.5 billion.

Among the reasons cited for the assertion is that mobile games are way cheaper than consoles. At times, they are in fact free of charge, with specific usage plans. Consoles, on the other hand, range between $300 and $500.

Another reason was the ban on gaming consoles in China. Notably, China only constituted 1% of the console gaming market even after the ban was lifted. But it was the top market for mobile gaming in the Asia Pacific. The country’s mobile gaming revenue amounted to $56.6 billion in 2020, up by 25% YoY.

View all posts by Nica San Juan
Top Two Highest Grossing Mobile Games in 2020 Rake in $5.1 Billion, More than the Next Four Combined
Was this article helpful?
0
0
Latest Betting News