Call of Duty: Modern Warfare is among the beneficiaries of the global pandemic in the eSports ecosystem. According to the Esports Observer PC Games Index, the game for the first time achieved Tier 1 status in Q3 2020.

According to the research data analyzed and published by Safe Betting Sites, during Q3 2020, Call of Duty had the highest total prize pool of more than $5 million. A huge chunk of this amount, $4.6 million, came from the Call of Duty League (CDL) playoffs. 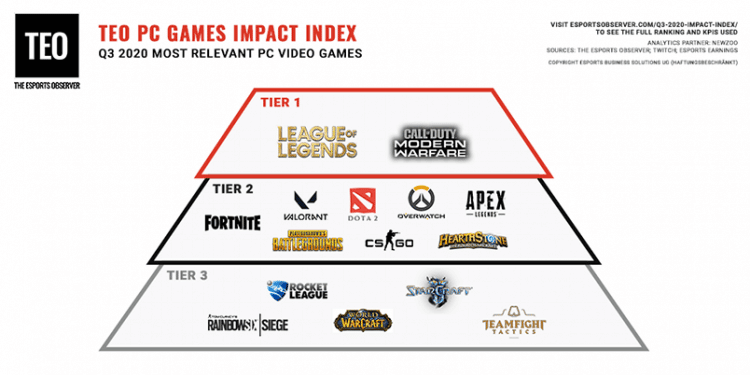 The period also saw a new record of the most watched Call of Duty eSports event. That event was the CDL grand finals between Dallas Empire and Atlanta FaZe. Peak concurrent viewership during the event was 330,000 viewers according to The Loadout.

This figure included influencers streaming the finals from their YouTube channels. It more than doubled the previous record of 156,000 which was set a week prior, during the Optic Gaming L.A vs. Chicago Huntsmen game.

Furthermore, Call of Duty: Modern Warfare was the most streamed game during Q3 2020 on Twitch. And even though a good number of its players used consoles during the period, its PC player base was the fourth largest in the eSports ecosystem.

Thanks to this combination of factors, the game shot up from sixth position to second place on the list of most impactful games in Q3 2020. According to the index, it achieved a score of 41.98.

League of Legends (LoL) was in the lead with a 77.92 score, earning the title of the most impactful game for the sixth consecutive quarter. LoL and Call of Duty were the only games to achieve Tier 1 status in Q3 2020.

A key reason for LoL’s dominance has to do with its player base, which was more than double that of Valorant, which had the second highest. LoL was also the most watched game on Twitch during the quarter. With the exception of Q2 2020 when Valorant topped the list of most watched games on Twitch, LoL has held the title since Q3 2019.

According to The Loadout, LoL had the most viewed tournament of 2020 by the end of Q3 2020. The LoL World Championship achieved a peak viewership of 3.8 million. Notably though, this was slightly lower than 2019’s 3.9 million.

CS:GO dropped out of Tier 1, primarily because of the absence of in-person events. However, based on its average viewership numbers and number of tournaments, it secured the third position. Its overall score was 37.04.

Its main events during the quarter are the ESL Pro League Season 12 (European and North American renderings) and ESL One: Cologne 2020 (online edition). Heroic won the decreased prize pool of the ESL One, a total of $325,000. Astralis took home the $450,000 of the European ESL Pro League, while in North America, FURIA Esports won $225,000. Valorant came in fourth with 28.33, followed by Dota 2 in fifth, with 27.93. Dota 2 was among the most adversely affected titles due to the postponement of The International.

Tencent Holdings Net Profit Soars by 85% in Q3, Activision’s up by 29%

In tandem with the games’ Q3 2020 performance, LoL and Call of Duty publishers also had a great quarter.

Net revenue for the period was $18.9 billion, up by 29% from the $14.7 billion posted in the previous year period. According to its earnings report, quarterly revenue from online games shot up by 45%, equivalent to $6.26 billion. Mobile games alone generated $4.92 billion for the tech giant.

Call of Duty publisher Activision Blizzard also reported earnings that beat expectations for the three-month period. Its revenue for the duration was $1.95 billion, an increase of 29% year-over-year (YoY) from the $1.28 billion reported in Q3 2019.

Monthly Active Users on Call of Duty: Modern Warfare and Warzone shot up by 300% during the quarter.