The introduction of ads by streaming platforms has been a significant discussion point in 2022. Amidst falling revenues, the industry giants such as Netflix have decided to introduce ads in their content this year.

According to the numbers presented by Safebettingsites.com, Netflix’s annual revenue from ads in the US market is expected to reach $1.7 billion by 2026.

Netflix’s to bring in $0.63 billion in ad revenue next year

2022 has been a tumultuous year for streaming platforms, notably Netflix. Earlier this year, the share price of the streaming giant crashed by more than 40% in a matter of two days.

To help its declining revenue, Netflix introduced ads in its content. Last month, Netflix launched its low-priced ad tier in eight countries, including the US. Shortly, the same subscription tier is expected to be launched in other regions.

According to the report from Activate Consulting, Netflix’s ad revenue should reach $0.63 billion in the US in 2023. According to Netflix’s financial statements, the company made a total of $29.69 billion in revenue in 2021. Thus, in the beginning, revenue from ads will only contribute marginally to the company’s overall income. However, Netflix’s ad revenue is expected to grow at a CAGR of 39% from 2023 to 2026.

According to estimates, Netflix’s ad revenue in the US will reach $1.7 billion by 2026.

Hulu makes most money from ads 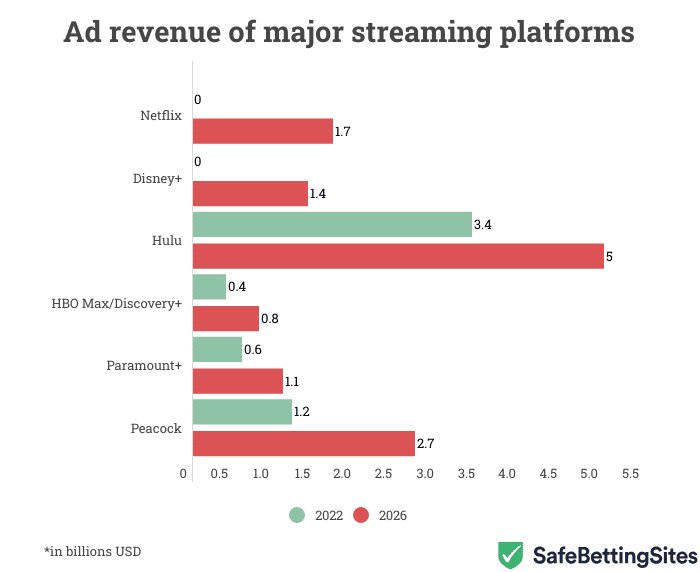 Disney+ also has plans to introduce ads-supported plans in 2022. The platform’s ad revenue is expected to reach $1.4 billion by 2026.

On the other hand, Peacock should witness an impressive increase in its ad revenue. Peacock made $1.2 billion from ads in 2022, and this figure is expected to reach $2.7 billion in 2026 – significantly higher than those of Netflix and Disney+.

View all posts by Vyom Chaud
Netflix To Make $1.7b Annually From Ads By 2026
Was this article helpful?
1
0
Latest Betting News