$21.2B in revenues during the first quarter 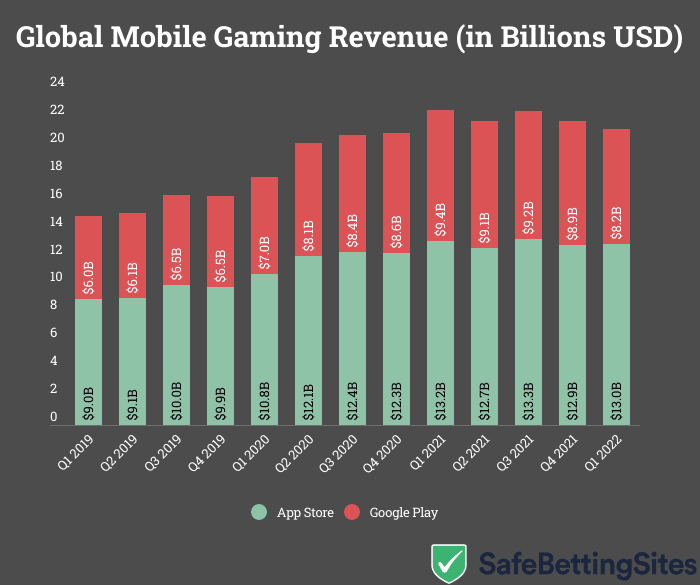 As evident from the above graph, the mobile gaming industry massively grew in 2020 and 2021, majorly due to the pandemic. In fact, the first quarter of 2021 was the biggest recorded in the history of the industry. Hence, the drop in numbers during the past quarter shouldn’t come as a surprise.

When compared to Q4 2021, there was a 2.8% drop in revenues in Q1 2022. This drop was also the second consecutive in quarter-over-quarter numbers. Hence, one can expect this downward trend to continue in the coming quarter.

App Store brought in 61.3% of revenues

A simple look at shares of both stores would make it clear that App Store brings in the majority of revenues in mobile gaming. During Q1 2022, mobile users spent a total of $13B on games in the App Store – which constitutes 61.35 of the overall revenue.

Vyom Chaudhary, an editor at SafeBettingSites, commented: “These numbers are more damning for Google Play than App Store. However, a drop is to be expected in the post-pandemic world. Compared to 2019, the industry is still in a very healthy state.”

3 days Ago
Manchester City’s net transfer spending since 2008 at $1.5B more than doubles that of Chelsea

RPG Top Mobile Game Genre With $24B In Revenues

Sponsorships In Esports Increased By 26%

63% Of US Gamers Purchased Games From Amazon Last Year