The FIFA World Cup is the biggest single-sport spectacle which is held every four years. It’s not a surprise that FIFA’s recent proposal of turning their biggest money-churning event into a biennial tournament has divided the football fanbase. 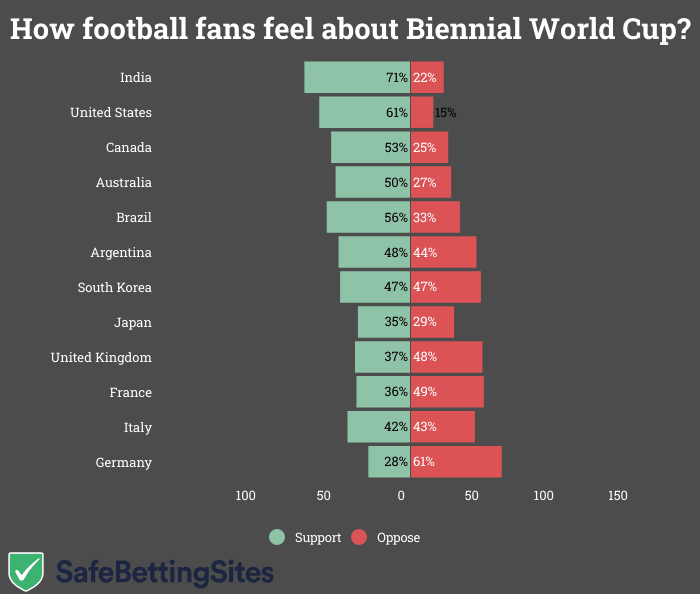 FIFA recently floated the idea of turning their quadrennial World Cup event into a biennial one. The World Cup has been in existence since 1896, and it serves as the biggest international tournament in the sport. Expectedly, FIFA’s proposal has received a significant backlash from fans and players alike. However, according to the recent Morning Consult survey, this backlash is mostly limited to football-playing European nations. As part of the survey, 400-789 self-identified football fans were asked about their opinions in every country.

In non-European nations, the idea has received a much better response from football fans. Surprisingly, the majority of fans from South American football-loving nations like Brazil and Argentina seem to support the idea of the biennial Cup.

Among all nations surveyed, India is most in favour of the new proposal. 71% of football fans in India would like to see the World Cup every two years.

Among the nations that have previously played in the tournament, the United States has the highest acceptance, with 61% of US fans supporting the idea.

In Brazil, 56% of fans support the idea, while 33% oppose the idea. The South American nation is the most successful country in the tournament, and if Brazilian fans support the new proposal, then it’s good news for FIFA. The division was less apparent in Argentina, with 48% in support of FIFA’s proposal and 44% in opposition.

In South Korea, the opinion is equally divided, with both support and opposition at 47%. However, in Japan, 35% of football fans supported the proposal, and 29% opposed it.

The new format was met with most aversion in European football powerhouses. The majority of football fans in Germany, the United Kingdom, France, and Italy oppose the idea. The divide is least visible in Italy, with 43% of fans in opposition and 42% in support.