Counter Strike Global Offensive was the most popular game on the gaming platform Steam in 2022. According to the figures presented by SafeBettingSites.com, Counter Strike GO averaged 603,770 players per hour in 2022. The second spot was occupied by Dota 2. 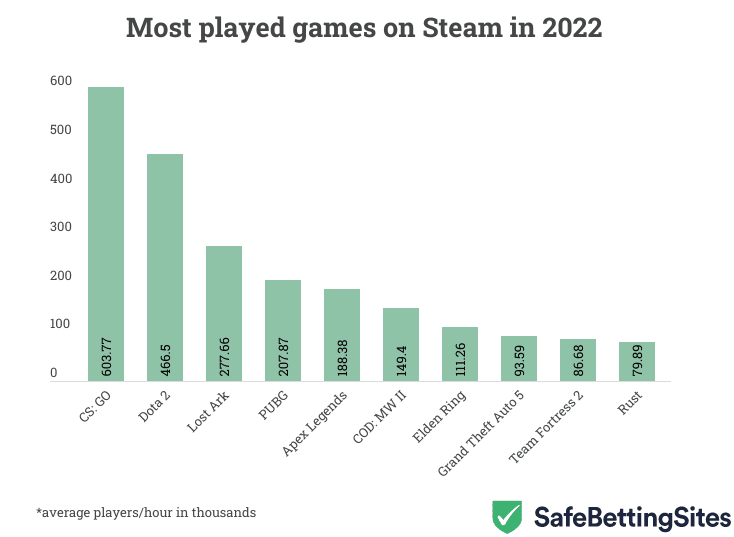 According to the Statista report, free-to-play tactical first-person shooter Counter-Strike: Global Offensive was the most popular game on Steam in 2022, averaging 603,770 players per hour. The second spot was occupied by the MOBA game Dota 2, with 466,500 users per hour on average. In fact, all of Steam’s top five games in 2022 were free-to-play games.

Call of Duty: Modern Warfare II is the next game on the list, with 149,400 hourly players. The latest instalment in the famous Call of Duty franchise was the most popular paid game on Steam. It was also the highest-ranked game on the list to be released last year. Modern Warfare II is a commercial success, and it was the fastest Call of Duty game to reach $1 billion in revenue (in 10 days). Hence, it’s not surprising to see it among the most popular games on Steam in 2022.

Blockbuster role playing game Elden Ring was the seventh most popular game on Steam in 2022. The critically acclaimed 2022 release from FromSoftware, makers of Souls games, averaged 111,260 players per hour.

Even nine years after its initial release, Grand Theft Auto 5 is still popular among Steam gamers. It averaged 93,590 players per hour on Steam in 2022.

View all posts by Vyom Chaud
Counter Strike GO Most Popular Game On Steam In 2022, With 604k hourly players
Was this article helpful?
0
0
Latest Betting News