The popular multiplayer online battle arena game Dota 2 again topped the yearly Esports prize money charts. According to the numbers presented here by SafeBettingSites.com, Dota 2 was the game with the biggest tournament prize pool of $32.85m in 2022. Arena of Valor, another MOBA game, was just a little behind in the second spot.

Arena of Valor second with a $32.7m pool 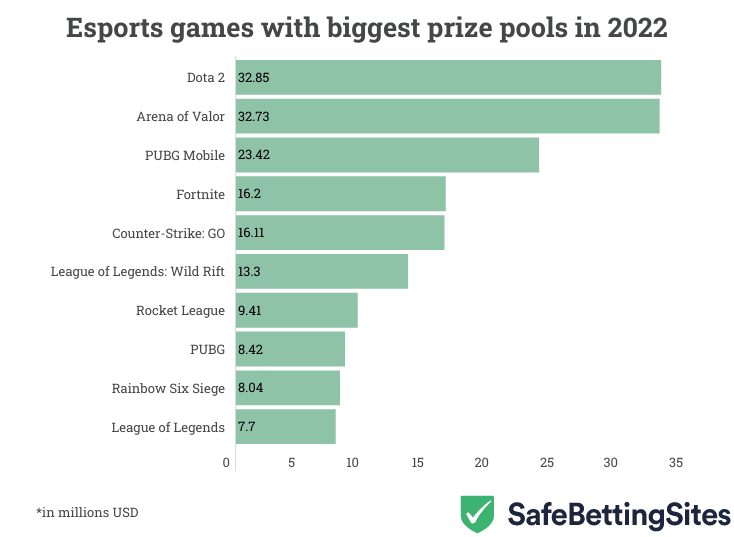 Dota 2 claimed the biggest prize pool on the Esports circuit for the second consecutive year in 2022. According to the numbers on Statista, Dota 2 players earned a total of $32.85 million in prize money in esports tournaments last year. In the second spot, Arena of Valor was just a little behind with $32.73 million in its prize pool.

Multiplayer first-person tactical shooter Counter Strike Global Offensive was the most popular game in its genre. Overall, CS GO sits fifth in the prize money charts with $16.11 in its pool.

The popular driving/soccer game Rocket League made its players $9.41 million in prize money last year. The PC/console version of PUBG is next on the list with $8.42 million prize money. If we combined the prize pool of both versions of PUBG, the game has a combined prize pool of $31.84 million – not far behind the top two games.

Rainbow Six Siege is the second tactical shooter on the list and ninth overall, with $8.04 in its prize pool.

The top ten is completed by League of Legends with $7.7m in the pool. If we combined pools of both versions of League of Legends, it amounts to $21m – which would put the game in the fourth spot of the overall list.

Hence, the top ten list is dominated by MOBA games. Overall, there are four MOBA games, three battle royale, and two tactical shooters on the list.

View all posts by Vyom Chaud
Dota 2 Leading Esports Game In 2022 With A $32.8 Million Prize Pool
Was this article helpful?
0
0
Latest Betting News