In a YouGov survey of 2,142 UK adults, commissioned by Safe Betting Sites, 33% of respondents say they don’t know what the International competition is.

A further 27% of respondents, who actually do know what the Nations League is, agreed the league ‘lacks merit’ as a serious competition. This climbs to a staggering 41% when asking UK males the same question. 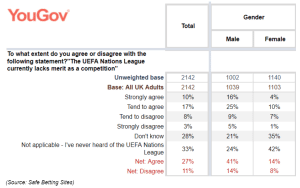 The Nations League was created by UEFA, as far back as March 2014, to replace Euro qualifying games before each European tournament. The league was a way of introducing improved incentives & consequences for European teams trying to qualify for the tournament, which takes place every 4 years.

The league has been criticised heavily over the years by high profile names in football, most recently manager Jurgen Klopp who described the tournament as ‘ridiculous’ back in May.

Interestingly, the most Google searched questions for UEFA’s Nations League are;

“UEFA has a long way to go to sell football fans on ‘The Nations League’, especially in the UK. Analysing the survey results – it’s clear football fans either see the league as an inconvenience to the domestic leagues OR are oblivious of the competition altogether.”

“Part of the negativity could be down to confusion of what the competition stands for, with the #1 question on search engines still being about the purpose of The Nations League a whole 8 years after its inception.”

View all posts by Liam Solomon
1 in 3 Brits don’t know what the ‘UEFA Nations League’ is, YouGov survey finds
Was this article helpful?
1
0
Latest Betting News