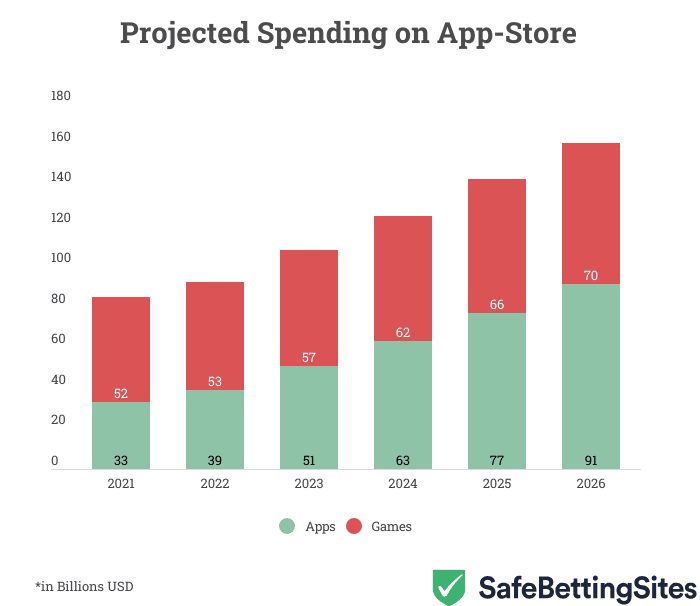 According to the information provided by SensorTower, non-gaming apps on App Store are expected to see tremendous growth in user spending in the coming years.

The cumulative user spending on app purchases, in-app purchases, and subscription fees in the App Store was $82 billion in 2021. Of this amount, $52 billion (61%) came from gaming apps and $33 billion (39%) from non-gaming apps. In 2022, the overall spending is expected to reach $92billion, an increase of 12.2% from 2021. Of $92 billion, non-gaming apps should account for $39billion (42.4%) and spending on games should account for $53billion (57.6%). Comparing these numbers to 2021 figures shows that spending on games will only increase by one billion. Hence, the majority of growth in App-Store spending in 2022 is expected to come from non-gaming apps.

As stated earlier, the majority of growth is expected from the non-gaming sector. The spending on non-gaming apps will increase from $33billion to $91billion – a massive change of 176% which is significantly higher than 35% growth expected for gaming apps.

The growth in spending on non-gaming apps is majorly attributed to the entertainment sector, with the subscription model becoming increasingly popular nowadays.

View all posts by Vyom Chaud
Non-Game Apps Spending on App Store to Become 3X by 2027
Was this article helpful?
0
0
Latest Betting News