For most football fans around the world, the English Premier League (EPL) is the pinnacle of the sport. And with good reason – the EPL is by far the most lucrative league globally. According to a Safebettingsites data presentation, the EPL generated a staggering €3.5B in broadcasting revenue in the 2021/22 season.

The EPL’s 2021/22 broadcast revenue is more than the Bundesliga, and La Liga combined. And it is a testament to the league’s immense popularity. Whereas the former attracted  €1.46B in revenues, the latter’s income stood at  €2.049B

Safebettingsite’s Edith Reads said: “The English Premier League is the richest football league in the world, and it’s no surprise that broadcasting rights are a major source of revenue.” She added: “In 2021/2022, the EPL sold its global broadcast rights for €3.5B. This is a staggering amount of money, and it just shows how popular the EPL is worldwide.

So Why is the EPL so Successful in Attracting Broadcasters?

The first factor contributing to the EPL’s success is its passionate fans. Football is deeply ingrained in English culture, and the EPL has some of the most ardent supporters in the world.

Finally, The Premier League’s success in generating income from broadcasting rights is largely due to its global appeal. The EPL brand is one of the most valuable in world sport, and this has been reflected in the amount of money broadcasters are willing to pay for the rights to show live matches. 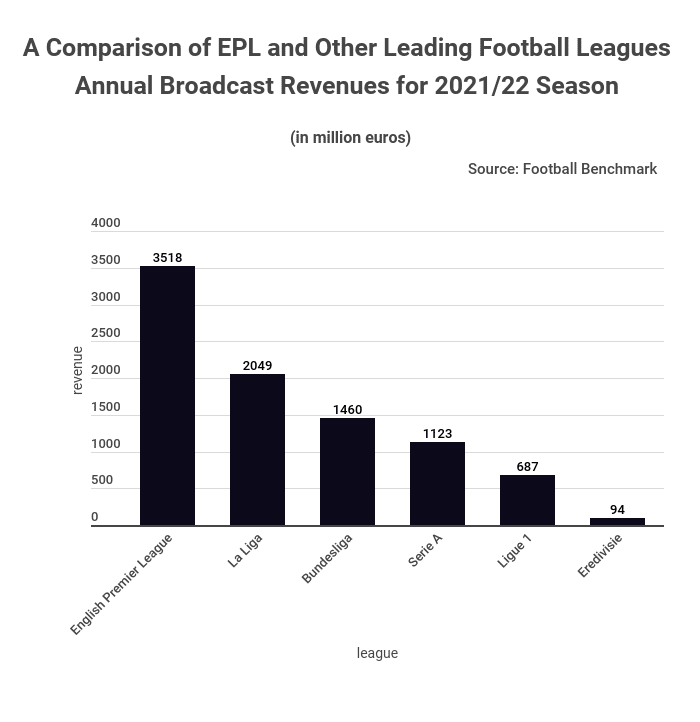 The top 10 clubs globally by total income in the 2020/21 season include five of the EPL’s big six clubs. Manchester City has a total operating revenue of €644 million. Others are Manchester united €557M, Liverpool €550M, Chelsea €465 and Tottenham €407M.

This is largely due to the EPL broadcasting revenue, which has allowed these clubs to significantly increase their spending on players and staff and improve their facilities. Their attracting some of the world’s best players and coaches has helped them achieve success domestically and in European competition.

Despite the positives of increasing EPL broadcast revenues, there’s a negative. It is increasing the financial disparities between teams. The EPL is one of the unequal football leagues in Europe, with the gap between the top six clubs and others increasing yearly.

View all posts by Edith Muthoni
Premier League’s Broadcasting Revenue of €3.5B Beats that of Bundesliga and La Liga Combined
Was this article helpful?
0
0
Latest Betting News