Home » Blog » only 31 of us consumers find streaming too expensive

The recent events with Netflix have put a minor but unavoidable question mark over the future of streaming. However, according to the data presented by SafeBettingSites.com, most viewers globally don’t find streaming options expensive. In the US, 31% of users find it too costly to afford all the streaming options they desire.

Sweden ranks highest with 42% not happy with current prices 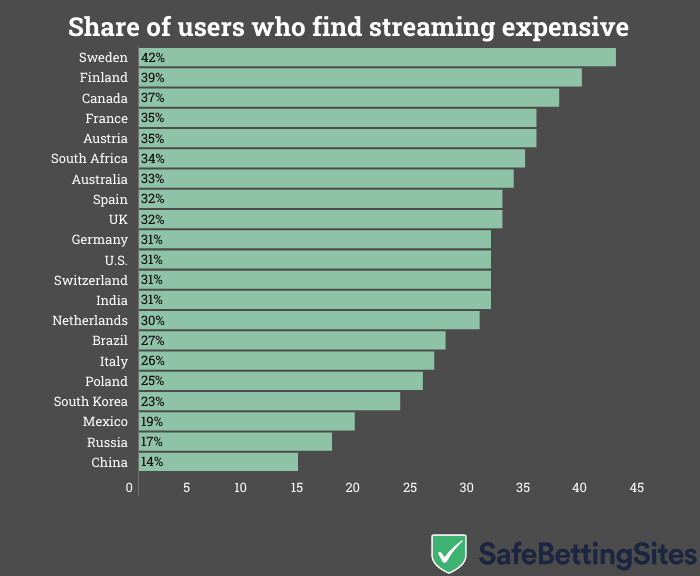 According to a recent Statista global survey, Sweden has the highest level of discontent towards the price of various streaming options – video, audio or game. The survey was conducted among 7,608 respondents from 21 countries. 42% of Swedish respondents said that they find it too expensive to pay for all of their streaming needs. Furthermore, European customers are more dissatisfied with subscription prices than customers from other regions. In the list, Sweden is followed by its Scandinavian neighbours Finland which has 39% of customers unhappy with prices. Canada is the top non-European nation on the list, with 37% of streamers in the country not satisfied with current expenses. However, four out of the top five nations on the list are European. When we look at the top ten, seven out of the top ten nations on the list are European.

In the United States, which is arguably the most important market for streaming platforms, only 31% of respondents labelled streaming options as too expensive. India, another significant market for media/content companies, also registered 31% of opinions not favourable of subscription prices.

Poland features lowest among European nations surveyed, with only 25% saying they find streaming all preferred options expensive. For South Korea, the figure stands at 23%. The likes of Mexico, Russia, and China have an even tinier percentage of users who find it expensive to stream all the options they want. In China, it appears that the cost of streaming is not a significant issue for viewers as only 14% of them find it expensive.

Vyom Chaudhary, an editor at SafeBettingSites.com, commented: “It’s interesting to note that the most opposition to current streaming prices comes from developed nations rather than developing ones. This contrast is mostly down to higher subscription prices in developed economies such as Western European countries.”

View all posts by Vyom Chaud
Only 31% of US Consumers Find Streaming Too Expensive
Was this article helpful?
0
0
Latest Betting News