The Corona lockdowns proved a boon for Facebook (FB) Gaming. In that period, the platform grew its viewership substantially. From 540 million viewers in Q1 2020, it could grow those numbers to 1.29 billion in Q3 2021. Come Q4 2021, the numbers took a hit, and since then, they’ve been free falling.

Safebettingsites has been analyzing the gaming sector’s performance with a keen interest in FB gaming. It has shown that the platform attracted 804 million viewers in Q1 2022. That figure is a 29.6% decline from the 1.14 billion viewers it appealed to in Q4 2021.

Edith Reads, analyst at Safebettingsites’ has had her take on the findings. She holds, “Facebook Gaming, as is the entire gaming sector, is grappling with falling viewership.” She adds, ” Many nations have greatly contained the pandemic, allowing people to resume their pre-pandemic lifestyles. As such, many people are cutting down on their entertainment budgets, including gaming.”

FB Gaming is not experiencing diminishing viewership only.  Its live streams have also shrunk nearly 11% from 14M in Q4 2021. The same now stands at 12.5M streams. Likewise, the live streams plunged almost 36% in YOY terms from 19.5 M in Q1 2021. The segment accounts for a 5% market share of streamed hours. 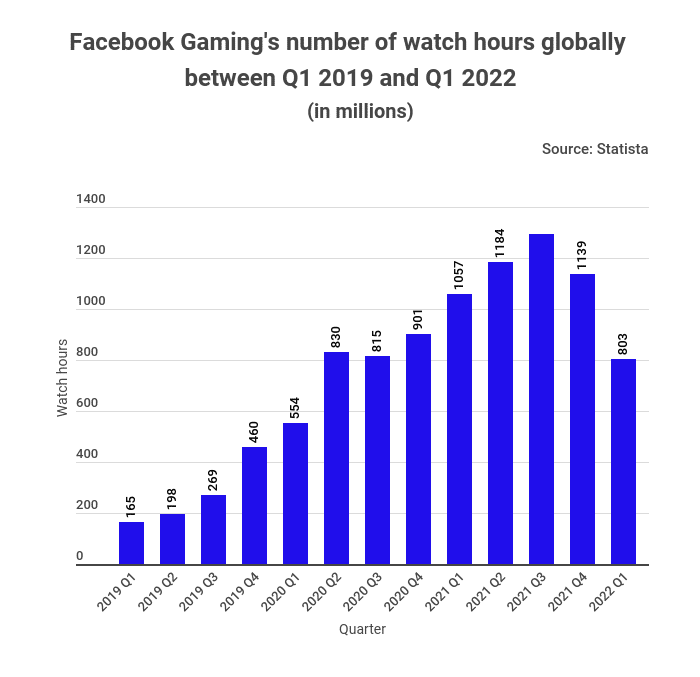 Notwithstanding the general decline in FB Gaming’s performance, several entities on the platform did well. For instance, LCK was the most-watched Esport, clocking over 44M hours. Just Chatting, on its part, was the most-watched category after registering 808M watched hours. Finally, the giant behind League of Legends, Riot Games was the top publisher with 912M hours.

Facebook says live gaming remains a priority to the company. Consequently, it is investing in efforts to draw streamers back to its Facebook Gaming platform. These include advancements in how it detects and stamps non-gaming content on the platform.

It insists that it’s a bold move on its part to limit the circulation of such content on FB gaming. And whereas that has impacted live Watch Time, it’s crucial to ensuring quality experiences for those using the platform.

FB Gaming expanded it’s offering in February by introducing Reels. Short-form videos have caught on, and every other social media is adopting them to boost engagement. The trend that TikTok popularized has also found adoption in Instagram Reels and YouTube Shorts.

The platform has also expanded access to its Streamer Fan Group to optimize creators. FB sees these groups as important in naturing connections between creators and fans. Additionally, they enhance communication within the communities and support members playing against each other.