The Premier League has become the hub of the most sought-after talent in football. In recent years, English clubs have garnered a reputation for spending vast amounts of money on transfers. English clubs continued their financial domination in world football in 2021. According to numbers presented by SafeBettingSites.com, English clubs spent a total of $1.386 billion on transfers in 2021. This figure was more than double the amount of money spent by the association in second place. 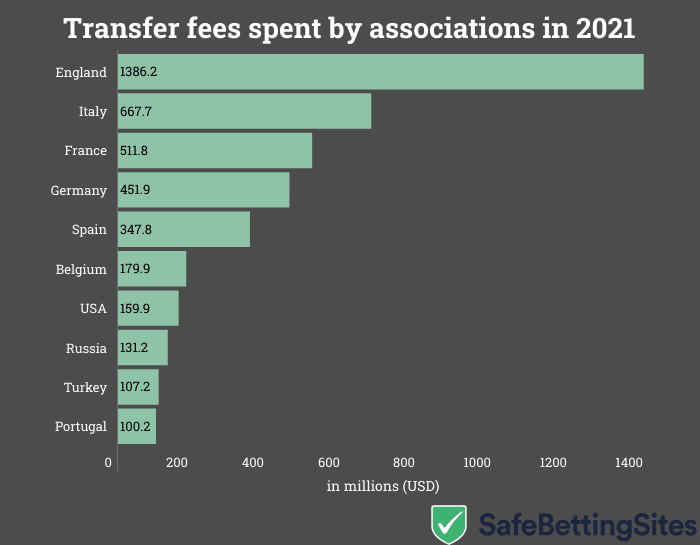 The financial might of English clubs is well and truly evident according to transfer figures made available by FIFA. The football industry might have been struggling from COVID-19, but that didn’t stop English clubs from spending more than a billion dollars on signing players in 2021.

According to the numbers, English clubs, led by the Premier League sides, spent a total of $1,386.2m on transfers in the past year. Italy followed England in the second spot.

The Italian clubs from Serie A and lower leagues spent a total of $667.7 millions on transfers in 2021. It’s interesting to see Italy ahead of other major European football powerhouses like Germany and Spain. However, the amount of money spent by Italian clubs makes up 48.2% of the amount paid by English clubs.

French clubs are not far behind in the third spot, with $511.8m spent on transfers in 2021. Expectedly, Ligue 1 giants Paris Saint-Germain were the biggest spenders in France during the past year. German clubs occupied the fourth spot with a combined transfer kitty of $451.9m in the past year.

Spain completes the top five with a combined transfer outlay of $347.8m. Spain’s lowly position is primarily down to Spanish giants Real Madrid and Barcelona refraining from spending heavy in 2021.

The United States of America is the only non-European nation to make the top-ten list. The North American country is in the seventh spot with $159.9m spent on players last year. It’s a sign of encouragement for MLS and for the sport in the country that the US made the list ahead of established European leagues such as Turkish Super Lig and Portuguese Primeira Liga.

View all posts by Vyom Chaud
English Clubs Spent $1.39 Billion On Transfers In 2021
Was this article helpful?
0
0
Latest Betting News