Big screen televisions have become a preferred mode to stream video content globally. According to the numbers presented by SafeBettingSites.com, 76% of streaming was done on big screens during the final quarter of 2021. Big Screen TVs are particularly popular in developed regions such as North America, whereas mobile phones are preferred for streaming in Asia.

83% of streaming done on big screens in North America 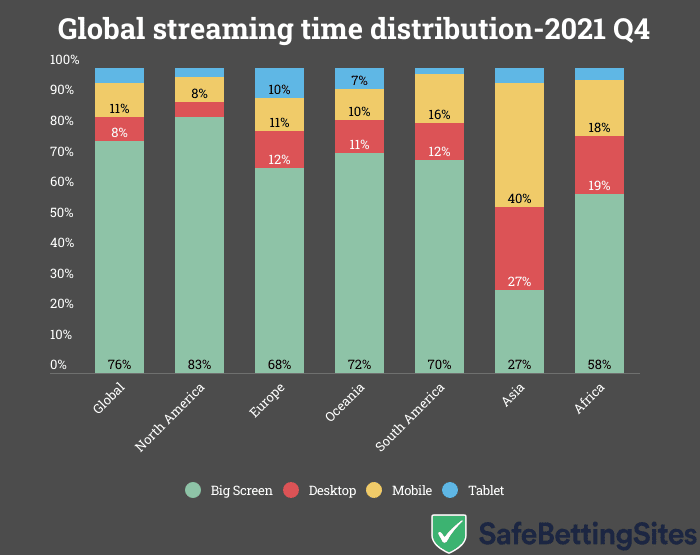 The audience seems to be moving away from desktops in large number as its viewing time has reduced by 12%. Mobile Phones witnessed a significant growth of 17% in viewing time. The amount of viewing time on tablets also increased by 5%

When we look geographically, continents with developed nations such as North America and Europe account for a higher share of streaming on big screens. In particular, the continent of North America has the highest percentage of big screens at 83%. The continent has desktops, mobiles and tablets at 5%, 8% and 3%. Thus, the NA has the lowest desktop and mobile shares compared to other regions.

In Europe, the share of big-screen streaming was at 68%. However, the continent has the highest share of streaming on tablets at 10%. It is the only region to have comparable percentages for mobiles and tablets.

Regions such as South America, Asia, and Africa have a comparatively higher share of streaming on mobile phones.

In Asia, 40% of streaming was done on mobile phones during Q4 of 2021. Asia is the only region to where mobile phones account for such a high share and are also the primary streaming mode. Only 27% of content was viewed on big screens in Asia, which is the lowest share among all geographical regions. However, the

Vyom Chaudhary, an editor at Safe Betting Sites Australia, commented: “Consumers are moving towards Smart TVs for their streaming needs. However, at the same time, streaming on mobile phones has also substantially increased. This increase is primarily due to a substantial rise in popularity of streaming platforms in regions such as Africa, South America, Asia where mobile phones are commonly used for streaming content.”

View all posts by Vyom Chaud
76% Of Streaming Done On Big Screens Globally
Was this article helpful?
0
0
Latest Betting News