The football landscape is still reeling from Covid-19, and clubs are reluctant to splurge money in the transfer market. According to numbers presented by SafeBettingSites.com, the football transfer market shrunk by around 14% in 2021.

The drop in 2021 continued the trend from the previous year, which witnessed a massive 23% reduction in money spent on football transfers. 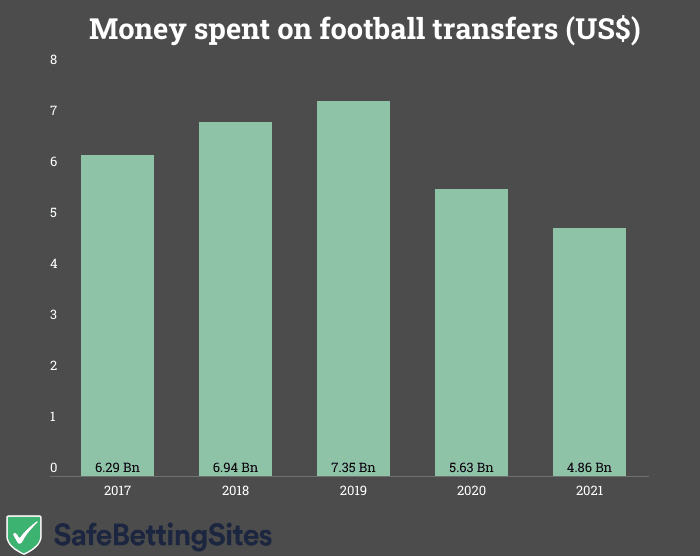 According to the transfer figure released by FIFA, clubs spent a total of $4.86 Billion on football transfers in 2021. This amount of money is the lowest spent by clubs on transfers in the last five years. Furthermore, the total financial size of the market in 2021 has been reduced by 34% since 2019.

These numbers further affirmed that the football industry is still struggling with the pandemic. Several sectors saw somewhat of an upward curve in 2021. However, the same can’t be about football clubs. There is still a lot of hesitancy and fear in the transfer market, and most major European clubs reported financial losses in 2020-21.

It’s also interesting to note that some leagues are struggling more than others. The summer of 2019 was significant for the footballing world as several clubs splurged money on big transfers. Players like Joao Felix, Antoine Griezmann, Eden Hazard, Harry Maguire, and Frenkie de Jong changed clubs. It’s interesting to note that four of the five most expensive players in 2019 were purchased by Spanish clubs.

In contrast, Spanish clubs refrained from spending in the summer of 2021. During the summer window of 2021, Jack Grealish, Romelu Lukaku, Jadon Sancho, Achraf Hakimi, and Ben White were the five most expensive transfers. None of them was signed by a Spanish club.

Vyom Chaudhary, an editor at Safe Betting Sites Australia, commented, “COVID-19 has severely restricted spending abilities of major European clubs. Especially the ones outside England. Spanish giants Barcelona and Real Madrid have refrained from spending money during the last two seasons. However, this should change in 2022.”

View all posts by Vyom Chaud
Transfer Spend In Football Down By 14% In 2021
Was this article helpful?
0
0
Latest Betting News