The eSports industry has made a swift recovery from the impact of COVID-19 in 2021. According to the numbers presented by SafeBettingSites.com, the collective amount of prize money in eSports tournaments increased by 60% in 2021. 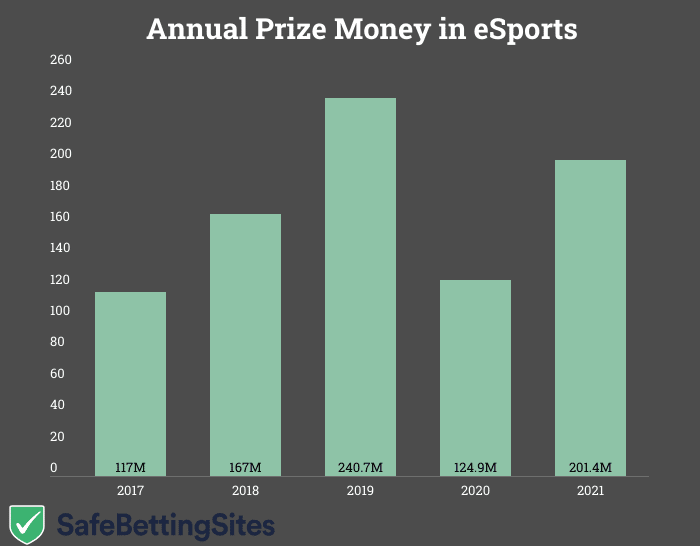 According to the numbers gathered from Esports Earnings, the annual eSports Prize Money haul was $201M in 2021.

The eSports industry was on a steep upward curve before Covid-19 hit in 2020. The annual prize money up for grabs in eSports increased by 106% from 2017 to 2019. This was a significant growth as the annual amount of prize money more than doubled in two years. In 2019, the future couldn’t have looked brighter for the entire industry. However, the entire industry took a big hit from the pandemic in 2020. Due to lockdowns and restrictions on live events, the number of tournaments and events dried up, which is reflected in the amount of prize money won in the year. As per the numbers presented in the report, the entire disruption caused due to the pandemic sent the industry a couple of years back – to the levels of 2017.

Vyom Chaudhary, an editor at SafeBettingSites, commented: “The eSports trends in 2021 looked much better than the year before, but it would be wrong to say that a full recovery has been made. The annual prize money in eSports was doubling every two years before the pandemic, and it would take some time to reach that level of growth.“

View all posts by Vyom Chaud
Esports Prize Money Increased 60% To $201M in 2021
Was this article helpful?
0
0
Latest Betting News