Home » EA And Rockstar Games Generate Most Interest Among US Gamers

Electronic Arts is the most popular video game producer among US video gamers. According to the numbers presented by Safe Betting Sites Canada, 64% of avid video gamers keep an interest in the controversial American video game development company.

Rockstar Games, another US-based company, sits in the second spot, with 61% of avid US gamers admitting taking an interest in the company.

64% of avid US gamers take interest in Electronic Arts 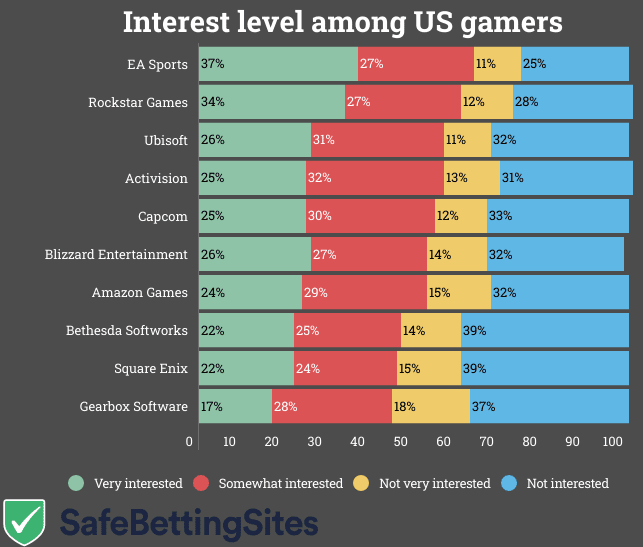 Electronic Arts has been mired in controversies throughout most of its existence. Initially, the company was infamous for its acquisition practices and work culture. In recent years, the company has drawn the wrath of video gamers with its loot box mechanism in Star Wars Battlefront II. Furthermore, they constantly attract criticism from gamers due to minimal evolution in its sporting franchises such as FIFA, NHL, NBA Live, and Madden. However, the recent Morning Consult survey proves that no publicity is bad publicity.

Electronic Arts, despite its less-than-perfect image, generates interest from 64% of avid video gamers. 37% of gamers claimed to be very interested in the company, and 27% were somewhat interested.

In the second spot, Rockstar Games generates interest from 61% of avid gamers. The American company is responsible for producing open-world games like Grand Theft Auto and Red Dead Redemption. Ubisoft and Activision are third and fourth, respectively, with a total of 57% interest rate. Ubisoft is a French company and the first non-US company on the list. The French developers are responsible for some really popular franchises such as Assassin’s Creed, Far Cry, Watch Dogs, etc. Activision is another US-based developer, famous for their Call of Duty franchise.

In the fifth spot, Capcom is the first Japan-based developer on the list. The Japanese company is behind several franchises such as Resident Evil, Monster Hunter, Street Fighter, Devil May Cry, etc. 55% of avid US gamers keep an interest in the company and its products.

Blizzard Entertainment comes sixth with an interest level of 53%. The US-based developer is famous for its online games such as Warcraft, Diablo, Overwatch, etc. Amazon Games was only established in 2012, and it doesn’t have a significant amount of games in its portfolio yet. However, it has already generated curiosity among US gamers. 53% of these gamers claim to keep an interest in this offering from Jeff Bezos.

Bethesda Softworks attract interest from 47% of US gamers. The American developer, currently owned by Microsoft, has developed games like The Elder Scrolls, Doom, Fallout, etc.

At the ninth spot, Square Enix is the second Japanese company to feature with an interest rate of 46% in the US. The company is most famous for its Final Fantasy series.

American developer Gearbox Studios finishes the top-ten list with a 45% interest rate among US gamers. The Texas-based developer is famous for its Borderlands and Duke Nukem series.