China and the United States continue to dominate the App Store market in the third quarter of 2021. According to the latest figures presented by SafeBettingSites.com, the two countries saw the most downloads on the App Store. However, we witnessed a switch in the top two spots as China overtook the US market in terms of downloads.

China reclaims the top spot in the App Store market 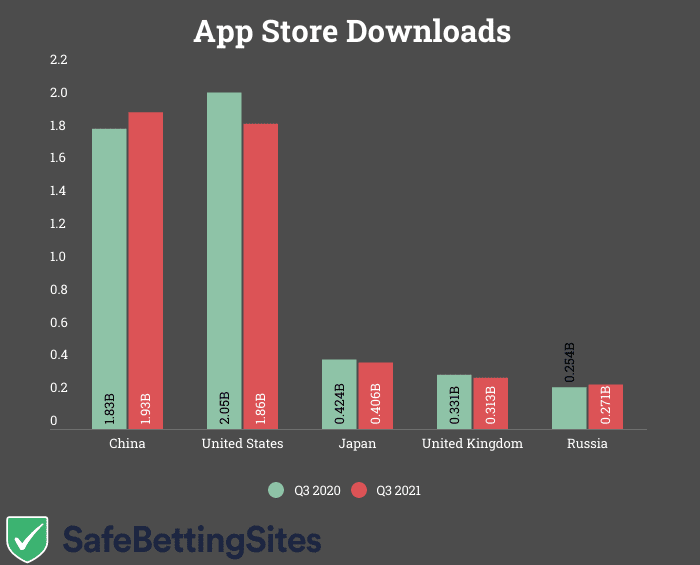 The increase in China’s numbers is particularly interesting as the app/mobile gaming market witnessed a massive boom in 2020 due to the Covid-19 pandemic. The digital market is seeing a readjustment this year in most regions, but China has bucked the trend. The growth in the Chinese market also propelled the country to the top spot after lagging behind the US market for more than a year. The report mentions that from Q4 2014 to Q1 2020, China had been the leader in the App Store market but lost its spot to the United States in the second quarter of 2020. However, the latest numbers suggest that the US domination over the App Store has come to an end following a period of five quarters. Furthermore, the 9.4% decline witnessed by the US market was the biggest among the top five markets in the App Store.

In the fourth spot, the United Kingdom market also witnessed a year-on-year drop from last year. The number of downloads fell from 331 Million to 313 Million – a decline of 5.6%.

Russia completes the top five with 254 Million downloads during the Q3 of 2021. Like China, Russia also defied the trend as it witnessed an increase in its numbers from last year. In fact, the Russian market grew by 6.8% – a more significant increase than that of China’s. The number of downloads went from 254 Million to 271 Million.

According to Sensor Tower, the estimates include daily download totals for iPhones and iPads from Jul. 1 to Sep. 30, 2021. Additionally, the report consists of only unique installs and doesn’t include Apple Apps.

View all posts by Vyom Chaud
China Overtakes The US In App Store With 1.93B Downloads In Q3
Was this article helpful?
0
0
Latest Betting News