As the dust settles down on UFC 269, we have decided to go down the history lane. In this feature, we will look at the fighters with the shortest and the longest average fight time in the history of the sport.

In this analysis, we have only considered fighters who have fought a minimum of five fights. According to the data presented by SafeBettingSites, retired US fighter Drew McFedries currently holds the record of the shortest average fight time of 2 minutes and 20 seconds. 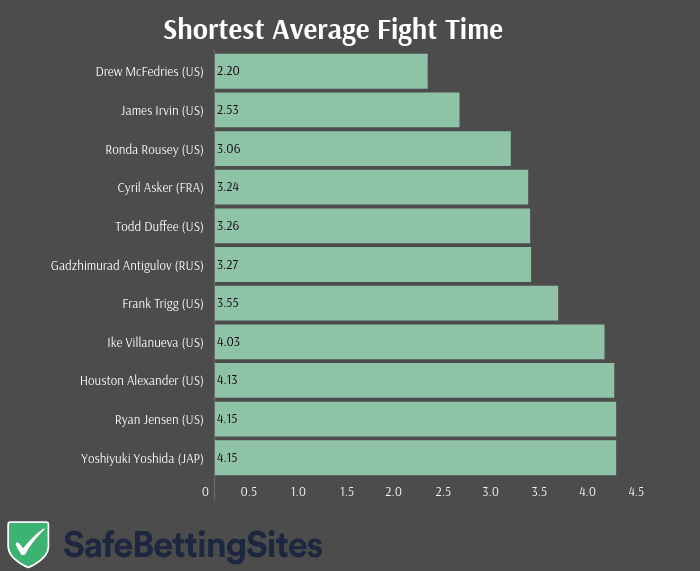 McFedries, also known as the Massacre, last fought in the Octagon in 2009. However, his record of the shortest average fight time still stands. He is followed by his compatriot James Irvin in the second spot, with an average time of 2:53.

In the third spot, we have Ronda Rousey. It’s a name that must be familiar to even casual fans. With an average time of 3:06, Rousey is the female UFC fighter with the shortest average fight time. Unlike the first two names on the list, she also had an illustrious UFC career. She became the inaugural female champion in UFC when she earned the Bantamweight Championship in 2012. Furthermore, in 2018, she became the first UFC female fighter to be inducted into the UFC Hall of Fame.

In the fourth spot, Cyril Asker of France is the first non-US fighter to appear on the list. The Heavyweight fighter made his UFC debut in 2016 and was on the roster until 2020. Among the remaining names on the list, Frank Trigg has arguably enjoyed the most successful career in UFC. Ike Villanueva is the only fighter who is currently active on the UFC roster. 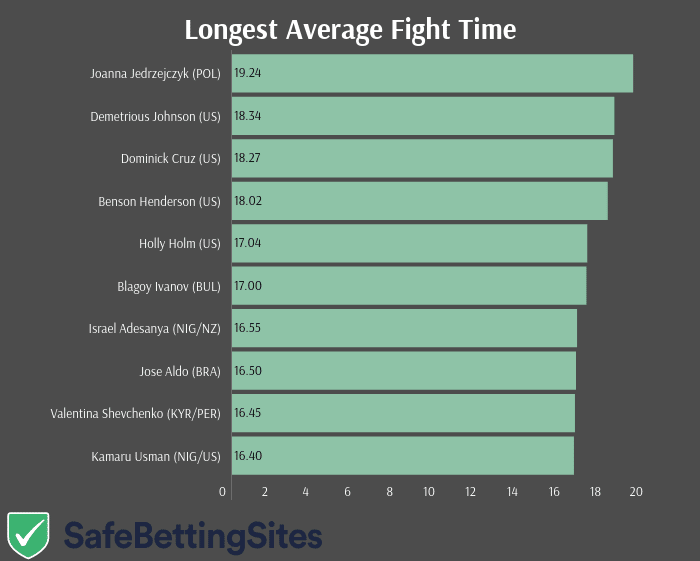 The list of fighters with the longest average fight time consists of three female wrestlers, indicating that fights between female fighters last longer than between male fighters.

Joanna Jędrzejczyk of Poland has the longest average fight time at 19 minutes and 24 seconds. She is a former UFC Women’s Strawweight Champion and is currently active in UFC. Demetrious Johnson sits highest on the list if we only consider male fighters. He is the former UFC Flyweight Champion and is regarded as one of the greatest fighters in the sport’s history. Currently-active UFC fighter Dominick Cruz occupies the third spot. He is a former two-time UFC Bantamweight Champion. Most of the remaining names on the list have had quite stellar careers too. The profile of fighters in this list contrasts sharply with the list of fighters with the shortest average fight time.

One can argue that successful fighters tend to have a longer average fight time than unsuccessful ones in most cases.