Among all professional European football leagues, Ligue 1 is the favorite destination of African footballers.

Most African representation in Ligue 1 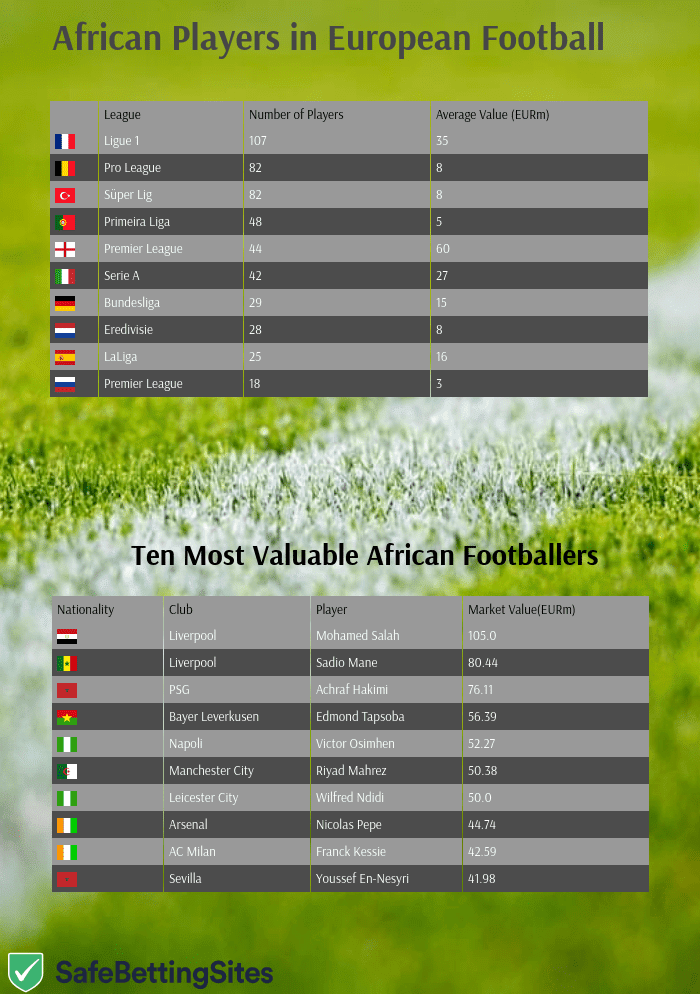 The French league is well clear of other leagues when it comes to African representation among players. Belgian Pro League, also known as Belgian First Division A, and Turkish Süper Lig are joint-second in the list with 82 players each. Portugal is also a popular destination among African footballers with 48 players from the continent currently playing in Primeira Liga.

Among the top five European leagues, Premier League is in the fifth spot in the overall list with 44 players from African nations currently playing their football in the league. Serie A is just behind with 42 players. The German Bundesliga has 29 players from Africa while Spanish LaLiga sits lowest, among the top leagues, with only 25 African players currently in the league.

However, when we look at average transfer values of players, figures borrowed from the KPMG Player Valuation analysis, Premier League registers the highest value. This comparison indicates that the best African talent has been hired by Premier league clubs in the recent years. The average market value of African players in the Premier League stands at 60 million Euros, which is significantly higher than any other league. Ligue 1 is in the second spot with an average value of 35 million. Serie A is third with an average value of 27 million Euros.

In the second chart, we see ten most valuable footballers from Africa. The top two sports are occupied by Liverpool stars Mohamed Salah and Sadio Mane. Salah is valued at 105 million by KPMG Football Benchmark, and Mane’s value stands at 80.44 million. The most valuable African player not playing in the Premier League is PSG wing-back Achraf Hakimi, valued at 76.11 million.

When we look at the overall list, Premier League’s dominance becomes apparent once again. Of the ten players, five currently play in the Premier League. Two of them play in Serie A, and once each in Ligue 1, Bundesliga, and LaLiga.

In terms of nationalities of players, we see two players each from Morocco, Nigeria, and Cote d’Ivoire. Egypt, Senegal, Burkina Faso, and Algeria have one player each in the top ten list.