The football world was delivered a huge blow last year as COVID put a halt on live events. Expectedly, the disruptions caused by the global pandemic put a significant strain on the financial capabilities of clubs and leagues.

However, now that the fans are back in stadiums, the top European leagues have already started to recover. According to data presented by Safe Betting Sites below, the Premier League continues to dominate other leagues regarding revenue generation. And they also seemed to be leading the race when it came to recovery from the pandemic.

Premier League leading the recovery from COVID-19 in football 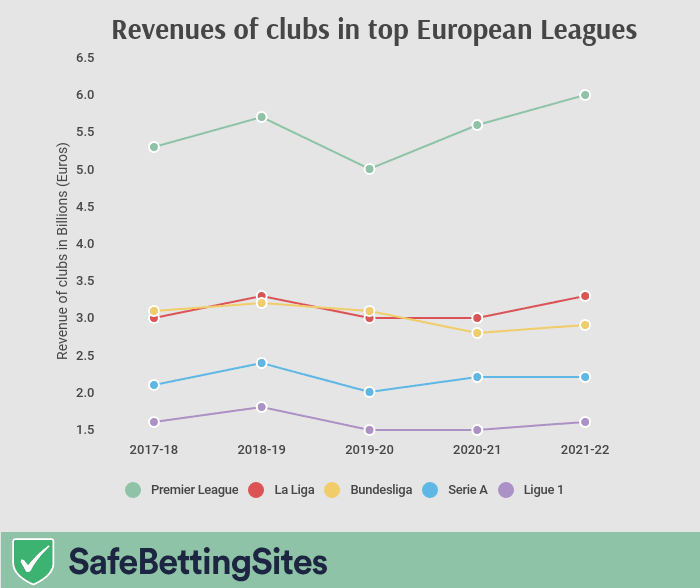 The same trend is visible in all other major leagues, indicating that the worst might be over in the footballing industry. However, the Premier League is the only major European league whose 2021-22 projections are an improvement on the revenues generated during the 2018-19 season.

Bundesliga, Serie A, and Ligue 1 lag behind

In the case of Bundesliga, Serie A, and Ligue 1, the situation is a bit direr. Clubs in all three leagues are expected to have increased revenues during the 2021-22 season, but these figures might not be enough to match those of the 2018-19 season.

Serie A used to be the second-largest revenue-generating European football league in the 90s’. As things stand, it finds itself in the fourth spot. The signs were looking positive for Italian clubs in 2018-19 as they posted total revenue of 2.5 Billion. However, this number suffered a dent of almost 20% as it fell to 2.1 Billion in 2019-20. It increased to 2.3 in 2020-21 and is expected to remain the same during 21-22.

View all posts by Vyom Chaud
Premier League only football league to recover from COVID-19 in 2021-22 : Study
Was this article helpful?
0
0
Latest Betting News